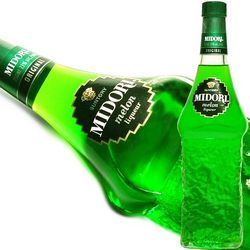 Japanese liquor produced by Suntory, flavored with the famous melons from the city of Yubari, Japan.

In 1971, when the international championship of cocktail organized by IBA (International Bartenders Association) held in Tokyo, the U.S. delegates tasted the melon liquor produced by Suntory and remained enthusiastic.

Given the success of this drink, the Suntory spent another seven years to develop a new brand for the international market: thus was born the Midori.

Therefore the year 1978 was the official debut in the United States at Studio 54, one of the most famous nightclub in New York, where there was in the crowd even John Travolta to taste this oriental liquor shrouded in mystery.

Already during the same year the Midori was a key ingredient in the cocktail “The Universe”, made famous thanks to the first prize taken at the annual championship Guild Bartender in United States.

Born in Japan and made famous in New York today it is a liquor that can not be missed in the bottler of any club in the world.

To produce Midori it is used the famous Yubari melon, which represents only one percent of the melon production in Japan. In this region, where the conditions are almost perfect, farmers grow melons carefully, as if they were their own children, till the day of harvest.