Wine distillate produced throughout the world. The most accepted etymology is to be found in the abbreviation of English brandywine, derived in turn from the Dutch brandewijn, burned wine. Over the centuries it shortened in Brandy, its actual name all around the world. Brandy is produced in Russia, Latin America, U.S.A., France, Spain, Italy, South Africa and in all other countries that make wine. In Italy the production of Brandy has very remote origins. Among the first documents found there is the permission granted in 1583 by Emanuele I of Savoy to Horace Senese for the production of distillated  wine and in 1601 was born in Venice the Congrega dell'Università degli Acquavitai (Congragation of University of Distillers). Since no regulation regarding the production of Brandy existed in the past, in the years when in Italy was taking place an excessive production of wine, that one of poor quality was initiated to compulsory distillation: this, of course, gave birth to a poor quality alcohol. Various manufacturers acquired alcohol from the State, taking care only of aging and bottling with a result of poor quality spirits. This gave rise to the need for greater care in the selection of raw materials for the distillation, bringing to the constitution of the Committee of Italian Origin Brandy. It identified the regions and the best grape varieties to produce a Brandy of good quality: the area of the hills between Tuscany and Romagna and the grape Trebbiano Toscano and Trebbiano Romagnolo, characterized by good acidity and low alcohol content. This wine distillate can also use bases resulting from the fermented juice of other fruits, in most cases, however, is produced from wine grape. The grapes gently pressed are fermented at a temperature between 18°C and 22°C. Once completed the distillation stage begins the aging, which foresees at least one year in oak barrels. It's allowed the complementary aromatization with oak chips or other plants substances or add of the alcoholic infusion, which must not exceed 3%. It's available to sweeten the distillate up to 2% and add caramel. The percentage of alcohol by volume must be between 38% and 60%, and generally Brandy is sold at 40% of alcohol. 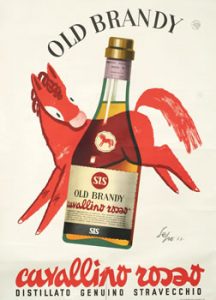