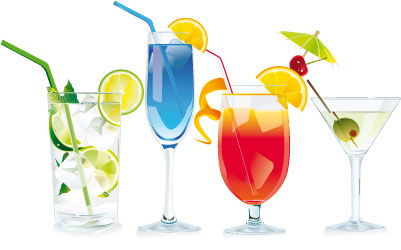 Drinks in which different ingredients are mixed together, trying to harmonize in an unique taste different qualities and characteristics. The word Cocktail first appeared in the edition of May 16, 1806 of the “Balance and Columbian Repository” which gave it the following definition: “Cocktail is a stimulating liquor composed of spirits of any kind, sugar, water and bitters.”

The first publication of a guide that included cocktail recipes was dated 1862: How to Mix Drinks or The Bon Vivant’s Companion, by Professor Jerry Thomas. In addition to the list of usual drinks with mix of liquors, there were reported 10 recipes named as “Cocktails”.

The ingredient which differentiated in this compendium the “cocktails” from other drinks was the use of bitter, even though this is not a common ingredient in contemporary recipes.

During the Prohibition in the U.S.A. (1919-1933), when the alcohol consumption was illegal, cocktails were anyway drunk in “speakeasies”, real underground gambling halls in which people came to break the law of prohibition. During this period the quality of the liquor was poor compared to the previous periods and for this reason the bartenders tended to mix liquor with other ingredients.

Just to this period go back the first real collections of cocktail recipes for the modern era, especially in Europe, with 900 “recettes de cocktail” of Torelli, bartender in Paris, in 1927 and The Sailoy Cocktail (English), 1931. To the success of cocktails contributed in a decisive way the cinema and literature.

The etymology of the word cocktail is not clear.

However, there are several hypotheses about its origin: it may be derived from English words cock and tail, in Fascist Italy was also adopted this literal translation, perhaps due to the fact that around 1400 in rural England was drunk a colorful drink inspired by the colors of the tail of the cock; it may have been originated from the alcohol mixture “cock-ale”, a drink that was given to cocks in the eighteenth century before a fight to increase strength and ardor; it could come from the “Coquetier”, French container for eggs that was used to serve liquor in New Orleans during the nineteenth century; another hypothesis always linked to French is that the modern term could be derived from the word “coquetel”, the name of a long drink in Bordeaux; it could be a distortion from the Latin “aqua decoct”, distilled water; it could derive from the legend that tells of a ship with wealthy British, landing in South America, celebrated by drinking European liquors and tropical juices mixed with a colorful cock feather.

However, are better known the birth and development of cocktails through the ages. The first example is found in the mix “Quirites”, a drink used by the Romans, consisting of mulled wine mixed with honey. It remained in vogue for many centuries, even after the fall of the Roman Empire, until when at the court of France led by Catherine de Medici the mulled wine was begun to stir with citrus juices and to give impulse to the development of new beverages mainly consisting of mixtures of medicinal herbs and other spirits.

To the cocktail in the modern sense, therefore, we came through the evolution of beverages born with health purposes, as an aperitif, digestive, tonic, etc.