Masataka Taketsuru, Yoichi distillery's founder, was born in the coastal town of Takehara (now Takehara City), about 37 miles from Hiroshima City. The family owned a Taketsuru "sake" (Japanese alcoholic beverage made from fermented rice), brewery that goes back to 1733 and still continues to produce nowadays (2004). Quickly learned that the art of brewing was something complex, Masataka studied diligently at the university as a chemist, preparing to carry on the family trade. However, during his studies, Scotch whisky captured the imagination of the young boy till to the point to make the decision to dedicate his life to Whisky. In 1918, Masataka Taketsuru undertook a long journey from his native land, Japan, to Scotland. In this distant land this young Japanese was taught the secrets of Whisky and here he met the woman who became his bride. Masataka enrolled at the University of Glasgow, becoming the first Japanese to study the art of Whisky. He followed the courses of chemistry at the university and was an apprentice in the distilleries, learningat first-hand by craftsmen. In 1920 Masataka returned to Japan with Jessie Roberta (Rita), which he married earlier that year. Later he entered to a company that aspired to make the real Whisky and succeeded with his first effort in the production of Whisky in Japan. The vision of Masataka of Whisky formed from his experience in Scotland and he knew that the right environment was essential. He understood that to produce the real Whisky he had to become independent. In 1934 he created the Nikka Whisky, and built his first distillery in Yoichi, Hokkaido, which he regarded as the ideal place in Japan for the production of Whisky, because it was similar in many aspects to the Scottish town where he had studied. Masataka gave birth to Nikka because he was determined to show to his Japanese colleagues the real flavor of an authentic Whisky. In subsequent decades, when his company grew and the Whisky became a regular appointment in Japan, was still alive the same passion for quality that never allowed to be sacrificed for efficiency. In this sense, Masataka Taketsuru, father of Japanese Whisky, son of sake, had never really left his roots. The young Scottish woman who, in 1920, took with her Japanese husband the long trip to Japan, adopted the customs of that distant country. She sustained her husband throughout their marriage in the construction of Nikka and in its growth until its overtaking in 1961. Rita and Masataka Taketsuru were buried together in Yoichi. Yoichi One off two malt Whisky distilleries of Nikka produces a rich, robust and peaty quality. The Whisky takes its flavor and body from the distillation carried out with direct heating, in which the pot stills are heated with natural coal dust, the traditional Scottish method that is hardly used today, even in Scotland. - It is situated Lat.43 10'N Lon.14045 E ', or about the same latitude as half State of New York, Toronto in Canada, Russia Vladivostok; - It is situated about 50 km west of Sapporo City, in southern Hokkaido, which is the most northern of the four main islands of Japan, and was one of the last frontiers Japanese to be developed; - It has three sides surrounded by mountains, and one side of the coast (Sea of ​​Japan); - It is blessed with the things that really count for a great Whisky: the perfect weather. Miyagikyo Travelling one day in this area, Masataka found himself in this site completely enclosed by mountains and placed between two rivers. He realized immediately that this was the perfect place for the distillation of Whisky. Fresh water of Sendai, adequate moisture and crisp air to produce soft and delicate malt. The position was selected for its clean air, the right humidity for storage, and abundant underground water filtered through a layer of peat. In Yoichi, Masataka Taketsuru saw many recalls of Scotland, and it convinced him that this must be the home of Japanese Whisky. The Distillery Miyagikyo is also in the north of Japan, Sendai (lat.38 N), Miyagi Prefecture, northern Honshu. 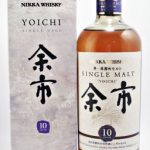