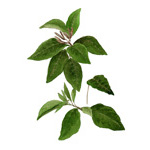 Kind of woody plants of the Andes, family Rubiaceae, with properties attributed to the alkaloids present in the cortex. The etymology is due to the legend of Ana de Osorio, countess of Chincon and wife of the viceroy of Peru, who recovered from malaria thanks to the virtues of the cortex of quina discovered by her around 1639.

In 1820 the french chemists Pierre Joseph Pelletier and Joseph Bienaimé Caventou isolated quinine, which was mainly used for the treatment of malaria.

Quinine is a tonic which, if taken in small doses, stimulates the organism resistance. Its taste is very bitter and its use is prominent in many cocktails called “chinati”: one of the best known is the “China Martini“.

It is used in the production of Barolo Chinato.