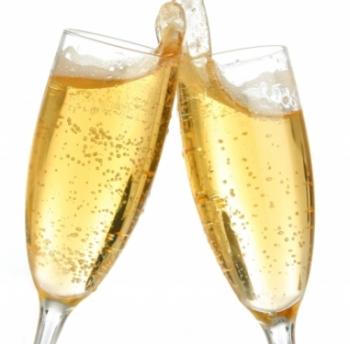 Sparkling wine produced exclusively in the homonymous region in the north-east of France. It is a product A.O.C. (Appellation d’Origine Contrôlée).

Its creation is attributed to the Benedictine Abbot Dom Pierre Perignon. The wines of the Champagne region were produced by monks since the times of the Middle Ages. It was, however, mainly still red wine, which were used by the monks for the religious mass and by the French kings as a drink. Around 1670 Pierre Perignon, a young Benedictine monk, came to the abbey of Hautvillers, near Epernay, in charge of the treasurer. He found the monastery and vineyards in a state of total abandon, due to the wars that had devastated the region during the first part of the seventeenth century, and tried to mend the situation with a certain decorum.

In making this reconstruction he devoted mainly to the production of wine through a accurate work: he selected the best grapes, chosing pinot noir; the most suitable land for cultivation; the best techniques of blending of wines, i.e. the assembly of the grapes of the same type from different areas; to obtain a clear must from black grapes he used a gentle squeeze.

These features are still today the basis for the production of Champagne.

There are many versions on how the still wine became sparkling wine:it  is said to be born due to a random error occurred during the winemaking process, or that the Abbot added sugar and peach blossoms in the spring to increase the pleasant of the wine, the latter containing yeasts that produced carbon dioxide; or that the winemakers who used to make wine of pinot grapes realized that the wine aged bad in barrels and they decided to bottle the wine immediately after fermentation: the bottles kept effectively aromas, but at the same time, the wine became sparkling.

Consequence of one or more of these errors was the blast of some bottles that was aging in the cellar that led the Abbot to the discovery of “froth”. He, realizing the pleasantness of this innovative product, began to perfect its production.

He introduced even the cork stoppers anchored to the neck of the bottle by means of a metal cage, replacing the wooden truncated cone stoppers used until then. Following the indications of Dom Pierre Pérignon other owners of vineyards in the area began to produce wine contributing to the improvement of the production method of Champagne.

Barbe Nicole Ponsardin’s company, the famous widow Clicquot (Veuve Clicquot), solved the problem of the formation of a deposit in the bottle during the stay in the cellar for the second fermentation, the so-called lees, through the “pupitres”, “V” inverted structures consisted of two wooden boards hinged on one side and with holes to place the necks of bottles, that allowed to invent the method of “remuage sur pupitres”: every day the bottles are rotated with a rapid movement, with a rotation of initially an eighth of a turn and then increased to a sixth and at the end of the trial a quarter turn. This operation aims to remove the lees from the inner wall of the bottle and lower it down to the neck. After every shaking the bottles are re-positioned at an increasing angle, until they are almost in vertical position, so that the lees will be in contact with the stopper. At this point the neck of the bottle is put in a saline solution at low temperature, that causes the instantaneous freezing of the lees, the stopper is taken off and with it the deposit of yeast. This operation is called disgorgement and, if done by hand, “à la volleys”. To replenish the part of the product lost during this operation is performed the dosage, i.e. the filling of the bottle with wine from the same stock if it is Vintage Champagne, or a blend of wines from previous vintages and sugar, called liqueur d’expedition.

One story tells that the shape of the glass cup where the Champagne was served had been modeled on the form, considered perfect, of the breast of Madame de Pompadour.

The Champagne is the only French product with a single appellation, has its own specific classificated terroir and cru.

There are almost 34,000 hectares of vineyards, spread across 323 crus, divided into five natural areas characterized by different conditions:

Côte des Bar, in Aube, in the chalky soils tending to marl the main grape variety is Pinot Noir. Champagnes of the Côte des Bar are wines with a character, round and with complex aromas;

Côte des Blancs, Department of the Marne, the main grape variety is the Chardonnay, the only white grape allowed for the production of Champagne. The soils, gypsum, provide high reserves of water and heat of the subsurface. The Côte des Blancs gives life to Champagne, characterized by liveliness and character, and by light and delicate aromas, symbols of refinement and elegance;

the Mountains of Reims, the Marne department, the hills, mostly south-facing, are characterized by chalky soils that provide excellent drainage and a light color that reflects the intense rays of the sun. The predominant grape is the pinot noir. In the cellars of the mountains lie some of Reims Champagne – known for the power, structure and the nobility;

Valley of the Marne, Marne and Aisne, the hills are characterized by clay and limestone, marl-prone. The main grape is the pinot meunier. Champagnes of the Marne Valley, thanks to their great variety, have a seductive fruity bouquet and a high softness.

So the champagne is a wine with special characteristics: the harvest must be done manually as it is essential that the grapes arrive at the correct degree of ripeness and perfectly intact to the pressing; as already mentioned, it can also be obtained from black grapes, pinot noir and pinot meunier, vinified in white. The method of production is the champenoise, the definition used only for sparkling wines produced in the Champagne region; in Italy this procedure is called the classical method. The method champenoise consists mainly in making a double fermentation of the must: the first time in the vats, the second time in the bottles; the assembly is often made between wines from different vintages and provenience in order to ensure the continuity of the features and organoleptic quality.The indication of the vintage, optional, is usually stated on the label when the assembled wines are of the same vintage as this is index of a high quality; it is a sparkling wine kept under pressure in the bottle by means of a mushroom-shaped stopper unlike the commonly used cylindrical plugs, covered with a metal capsule and held by a wire cage.

Champagnes can be distinguished by color, type of used grapes or the dosage: it can be white, or more rarely rosé, made by mixing white and red wines or by a short maceration with the skins of red grapes; if obtained only from white grapes it is called blanc de blancs, if only from black grapes it is called blanc de noirs; the dosage is an addition to champagne before bottling of a small dose of syrup made of sugar cane, wines of the same lot or older wines.

Before there was a custom to add cognac or armagnac, a practice now almost abandoned. Each manufacturer jealously guards the composition of the mixture that determines both the final organoleptic characteristics of champagne and, for the amount of sugar present, its type or, indeed, dosage: brut, sec, demi-sec etc.. The purpose of the dosage is dual: on one hand it is used to sweeten a wine that has no residual sugar and, therefore, shows very high acidity, on the other hand, it is essential to provide champagne (especially if non-vintage) the nuances of aroma and taste characteristic of the manufacturer, that is what is referred in the slang goût maison.

The classic bottle of Champagne is called Champagnotta, has a capacity of 75cl and is thicker and more resistant than normal wine bottles.

Only the half-bottle, the bottle and magnum are used for the second fermentation, other formats are generally filled with wine already fermented. On the label of the bottle of Champagne there is a lot of information: the brand, the name of the winemaker, the dosage (brut, sec etc..), a vintage, the municipality of origin of the grapes, and sometimes the quality of the grapes: grand cru for the seventeen municipalities that have the right to have this title (the finest) or premier cru for other forty one municipalities. In addition they must indicate the professional organization of the manufacturer, with a two-letter abbreviation usually printed in small on the label.

This acronym, which is perhaps the most important indication for defining the quality and value of a Champagne, has the following meanings:

NM: négociant-Manipulant, is the case of a Champagne manufacturer that buys grapes and assembles them to develop and market the wine; is generally the finest Champagnes produced by the most famous houses;

RM: récoltant-Manipulant, brings together all the growers who process and market their own grapes, they are generally very good products;

CM: cooperative de manipulation, is the case of groups of producers who assemble the grapes, process them and market them, it is generally an acceptable product;

RC: récoltant-coopérateur, the wine growers deliver their grapes to a cooperative that has a mandate to carry out the vinification,  then the bottles are returned to individual producers for marketing;

MA: marque d’acheteur, is the case of a trader who buys the bottles ready for consumption and sells them with his own brand.