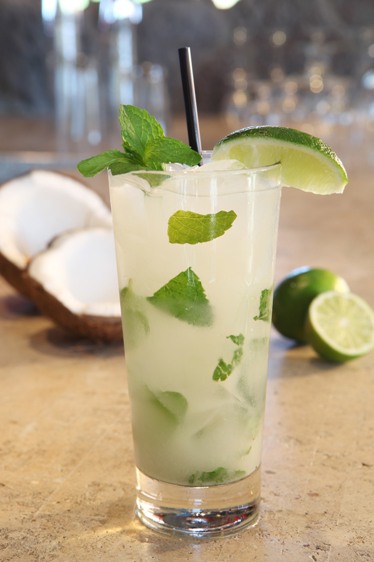 Method of mixing Muddle into a Juice Rock glass or High Ball Rock glass. Muddle the ½ lime with the brown sugar and the coconut pieces into the glass in order to obtain a homogeneous pulp; gently press the mint sprigs being careful not to brake its leaves; add ice, preferably crushed, to fill up the glass; pour rum and coconut-flavored rum in the glass together with coconut syrup/milk and sweet & sour mix; shake all the ingredients of the glass with the help of the boston shaker for a few seconds, not to melt the ice, and pour all contents in the juice/high ball rock glass. In the end you can decorate the drink with a sprig of mint, a slice of lime and coconut flakes on the surface.

In the summer of 2007 at the Stairs Club of Rome the current Master Trainers of MIXOLOGY Academy invented an early version of this cocktail with an alcohol base of vodka and, after a few experiments, it turned to its current recipe. It is not known who was the first in the world to give life to this tropical variation of the original Mojito cocktail, but this drink has established itself over the years as a successful mix!