The birth of the company is sanctioned by the Act of June 6, 1757, the year in which the master distillers Carlo Stefano Cinzano and Giovanni Giacomo Cinzano were welcomed at the Università dei Confettieri e Acquavitari di Torino. The Cinzano brothers began to produce in their shop in Turin, Italy, a series of wine flavored with spices and local herbs.The Cinzano vermouth is born from the union of wine, alcohol, sugar and infusion of spices and herbs, among which the most important is the artemisia absinthum. In 1786 Cinzano was appointed official supplier to the Royal House of Savoy. In the first half of the nineteenth century Francesco Cinzano opened a workshop of acquavitaro in Turin, followed by a similar of Giovanni Cinzano, for the production of vermouth. In 1840 was produced at the request of Savoy, the first Italian sparkling wines to the advance of Champagne and in 1884, with the progress of the work of vermouth, Francesco Cinzano rented the house real estate in Santa Vittoria d'Alba called "L Muscatel", followed in 1902 opened the first manufacturing plant abroad, in Chambery, France. The company became famous worldwide for its vermouth and was noted for innovative and imaginative publicity campaigns from 1887 to the 60s. In 1999 the brand Cinzano was bought by Gruppo Campari, which caused him to rise giving it a new look, modern, bold, for the new millennium. 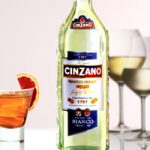 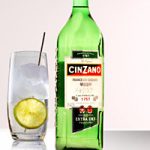